Dr. Ley was born and raised in Cañon City and attended Colorado State University where he earned his Doctor of Veterinary Medicine degree in 2001. Upon graduation, he returned to Cañon City to join father, Dr. Donald Ley, at the clinic, where he thoroughly enjoys the never boring aspect of a mixed-animal general practice. He is married to Sarah, who keeps busy as a part-time athletic trainer at Cañon City High School and helping out in the clinic when not wrangling their three children, Madelyn, Jackson, and Olivia.

Dr. Ley says his family's passion for God and the blessings he has provided them drives their lives as they enjoy the outdoor activities they are so fortunate to have available in such a wonderful place like Cañon City. The Ley family stable of animals currently includes Remy, the lab; Grit and Abner, their trusty horses; Mouse, a brown Swiss cow; Gabby and Tucker, fearless mouse hunters; and an ever changing population of goldfish. 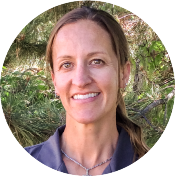 Dr. Menegatti grew up in Cañon City, and, with her father's veterinary practice in the back yard, it was inevitable that she follow suit and pursue the family business. She graduated from Colorado State University with her Doctor of Veterinary Medicine degree in 2006 (now one of six "Ley Family Vets" to graduate from CSU!). Dr. Menegatti joined her father, Donald Ley, and brother, Jeremy Ley, at Fourmile Veterinary Clinic, where she practiced full time for 2 years. She then married her wonderful and supportive husband, Jeff, who is a full-time ranch manager for the Twin Peaks Ranch west of Aguilar, CO. They live at the base of the beautiful Spanish Peaks along with their son Joe, and furry family of dogs, cats, horses, and cows. Dr. Menegatti now practices part time at Fourmile Veterinary Clinic and serves as a relief veterinarian for several practices in the Southern Colorado region. 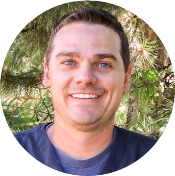 Dr. Doug Nicodemus was born in Wheatland, Wyoming. He went back east to play college baseball at a small agriculture school in west Tennessee for his undergraduate work, then went on to the University of Tennessee for his veterinary education. While there, Dr. Nicodemus met his future wife, Dr. Maranda Nicodemus, who is also a veterinarian. He always had an interest in returning to the West to practice, and, after graduating in 2011, Doug and Maranda moved to Wyoming and began working for a mixed-animal practice. He enjoys all aspects of veterinary medicine, with a specific interest in beef cattle. In 2015, Doug and Maranda moved to Cañon City and began working at Fourmile Veterinary Clinic.

Doug and Maranda have two children, a son Easton, and a daughter, Henley. The rest of their family includes a Dachshund name Badger and two golden retriever puppies named Gus and Buttersnap. They enjoy hiking and snowboarding and watching Rockies baseball and Avalanche hockey.

Dr. Maranda Nicodemus was born in Tennessee and raised on a small cattle farm, which gave her a love for animals at an early age. She graduated from Lee University in Cleveland, Tennessee, with a degree in Biology and then attended the University of Tennessee where she received her Doctor of Veterinary Medicine degree in 2012. After graduation Dr. Nicodemus moved to Wyoming where she enjoyed practicing alongside her husband, Doug. In 2015, they moved their family to Cañon City and after settling in, began working for Fourmile Veterinary Clinic in May of 2016. Maranda and Doug are very thankful to be a part of the Fourmile Veterinary Clinic family!

Maranda and Doug share their home with their two children, a son Easton, and a daughter, Henley. Their pet family includes two Golden Retrievers named Gus and Buttersnap, and a Dachshund named Badger. In her spare time Maranda plays ice hockey and is an avid Colorado Avalanche fan. She also enjoys hiking, camping, snowboarding, and watching Rockies baseball. 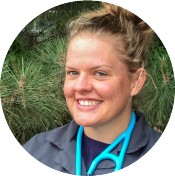 When Dr. McGinniss is not providing high-quality veterinary care, she enjoys spending time with her family, her dog, Arie; cats, Zinny and Pippin; and horses, Cricket and Mousse. If the sun is shining you can find her outside! Sarah is an avid outdoorswoman and loves hiking, skiing, riding and showing horses, training colts and so much more.

Just over a mile off of Hwy 50, on the corner of Highland Ave. and Lincoln St.

Send Us A Message!